We have a large master closet. However, when we moved in, we were literally putting stuff wherever it fit & was out of the way. What that meant was that our closet basically became a storage closet for us. The basement was also treated that way and is still an absolute mess! But, I don’t see the basement everyday, so that’s a problem for another day. I have to go into our bedroom closet at least once a day and every time I would have to, I would get so frustrated about how messy and cluttered it was. So, we finally took the original wire shelves down (most at least) and put up new shelving. It’s been 2 weeks now since we did all of it & it’s still clean!! Win for us!

For the shelving, we went to Ikea (of course!). I love the idea of the Ikea Pax line–you can customize it however you want, plus because it’s so customizable, it fits nearly every budget. Our closet is about 8′ x 9′. We wanted a section for clothes, bed linens & an area to work as a bathroom/towel closet. We have a 2 story, 3 bedroom, 2 bathroom house, but only one actual linen closet. That makes no sense at all to me! A family of 4 needs more that one closet. So because the master closet is big, we decided to use part of it for towels, etc.

So, here’s the before–what we’ve been living with (!) and after we removed the wire shelving. Because the wire shelving was mostly anchored into the walls, there were several large holes that needed to be patched. 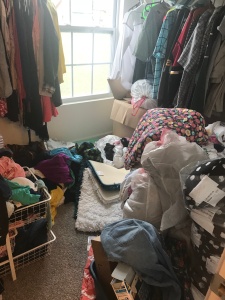 For the shelving, for right now, we decided to just put it in the corner area and the wall along the window. We don’t know if we want the entire closet to be all shelving. Again, another reason I love Ikea! Because a few of the other stores that we looked at, the shelving was set widths and lengths, so we didn’t have the flexibility that we do with the Pax system.

And here’s everything that we did, finished. 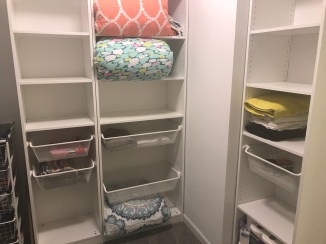 We’re super happy with the outcome–what do you think?

This site uses Akismet to reduce spam. Learn how your comment data is processed.